Skip to content
HomeWorld War IThe First of Many Parades

The folks in Richmond have always loved their parades.

In the same issue that notified Richmond of the declaration of war, the Richmond Palladium announced that there would be a huge “patriotic celebration” that would take place as soon as a committee could arrange for it.  Groups from all over the county – not just the city – first met on Monday,  April 9, and they decided on the following Monday, April 16 for the parade.

Every paper for the following week posted updates.  As early as Tuesday the 10th, the Item listed 42 organizations that were planning to participate, plus the names of all the committees and members.  By Thursday, the Palladium touted that up to ten thousand people would be marching in the parade. Ten different bands, including the Weber Band of Cincinnati and the Indianapolis News Newsboys band.

The committee decided to hold the parade at 4:00 p.m. so that schoolchildren could participate.  A mass political meeting was to follow in the Coliseum at 7:30.   Mayor Will Robbins proclaimed the afternoon a holiday. 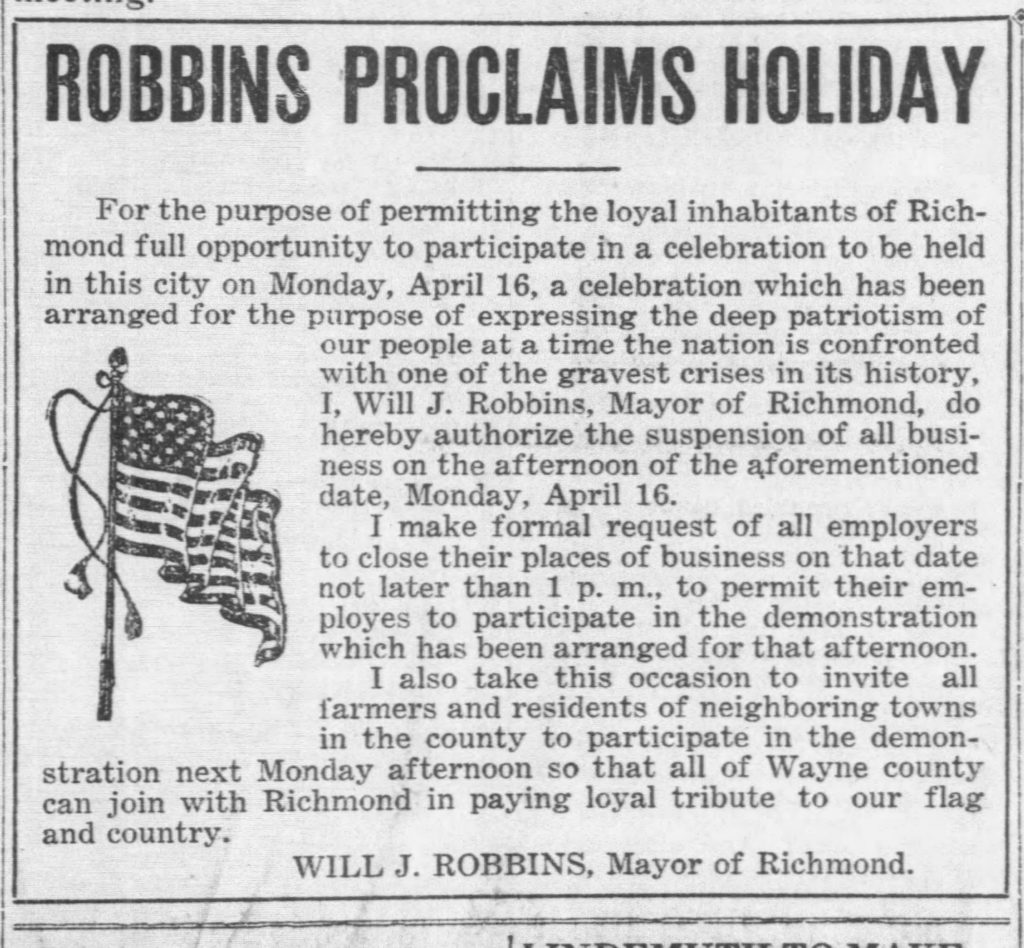 The Palladium on the 16th (the Item didn’t publish on Mondays) reported that crowds were pouring into town for the “County’s Greatest Rally.”

The snapshot shown above possibly shows the start of this parade.  It’s not labeled at all, but the coverage of the next day says that the parade was headed by “three young men dressed in the costumes of Washington’s Continentals – ‘The Spirit of ’76’ “

The Item reported that 3,500 people marched in the parade which took an hour to pass Eighth and Main Streets.  “With delegations ranging in size from that of 398 High school students, including their own band and drum corps, down to the Richmond Greeks, with a representation of fourteen, 3,500 men, women and children participated in the monster patriotic parade yesterday afternoon.”  Veterans, lodges, churches and businesses all sent delegations.

“Only Maimed and Sick Fail to See Parade” declared the Item, and “None Can Question Richmond’s Loyalty.”  “If there was any one of Richmond’s 30,000 inhabitants who was not either an active participant or an enthusiastic spectator at yesterday’s great patriotic parade, it was because he or she was physically unable to get down town.”

While researching this parade, I’ve located three (so far) other parades during World War I, each of which was touted as the greatest or largest parade Richmond had ever seen.