Skip to content
In an age when most of us carry our telephones around with us, we’re never far away from a quick call, text, or any other kind of contact, much less access to 911 for emergencies. It’s probably hard to imagine not having cell phones, but 55 years ago, Richmond’s citizens didn’t even have their home
Read More
The Richmond Baking Company was established in 1902 by William H. Quigg. It soon occupied the former Hoerner Baker building on South 5th Street. William’s two sons, Eugene and Robert, were also involved in the business. In 1917 the company purchased the land of the former Gaar, Scott & Co., intending to build a new
Read More

The Starr Piano Company began as the Trayser Piano Co. in 1872. One if its founders was James Starr. In 1878, the company was reorganized as the Chase Piano Company, and Benjamin Starr joined his brother James in the business. In 1884 they bought 23 acres in the Whitewater Valley gorge and constructed a six-story
Read More
The roots of Wayne Works go back to Dublin, Indiana in the 1830s when Caleb Witt, James Witt, and John Whippo started a foundry to manufacture farming implements. The business grew quickly until it was incorporated as the Wayne Agricultural Works in 1868. In 1875 the up-and-coming city of Richmond lured the company to a
Read More
December 31, 2018 was wet and windy from start to finish, producing temporary ponds in backyards and streets, but little serious damage.  That was not the case more than 180 years earlier. The last several days of 1846 saw heavy rain nearly each day, and by New Year’s Day nearly every creek and stream in Indiana
Read More
This card dates from the late 1920s.  The Cut Rate Shoe Store opened in 1926 and changed its name to Brown-bilt Shoe Store in 1929.  One of its prime features was the separate children’s shoe store in the basement, the Merry-Go-Round Shoe Shop, specializing in Buster Brown shoes.
Read More 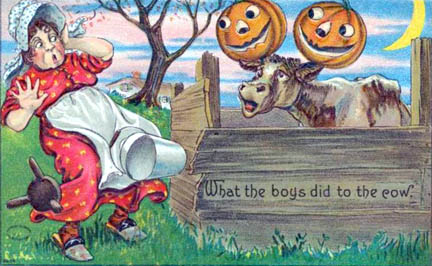 Halloween around the turn of the century often involved youngsters playing pranks on their neighbors, heaving cabbage and other excess vegetables at houses, attending masquerade parties, and generally making merry in the streets on All Hallow’s Eve.  In 1918, all these activities were curtailed. Mayor William Zimmerman proclaimed that Halloween of 1918 would be
Read More
One hundred years ago Richmond was dealing with the so-called Spanish Flu.  The rest of the world was dealing with it as well, which made it a true pandemic. The story of this particular influenza strain is tied to the story of the World War.  What might have been a harsher than usual flu outbreak,
Read More

Cartoon from the Richmond Item September 8, 1918 It wasn’t until after Labor Day that Richmond’s students returned to the classroom in the fall of 1918, and this return was different than it had ever been before. Richmond’s large German population had ensured the presence of German-speaking institutions, including churches, a newspaper, and a bank.
Read More